← back to
kythibong records
Get fresh music recommendations delivered to your inbox every Friday.
We've updated our Terms of Use. You can review the changes here.

Morton (Sibling Songs) And Other Descriptions 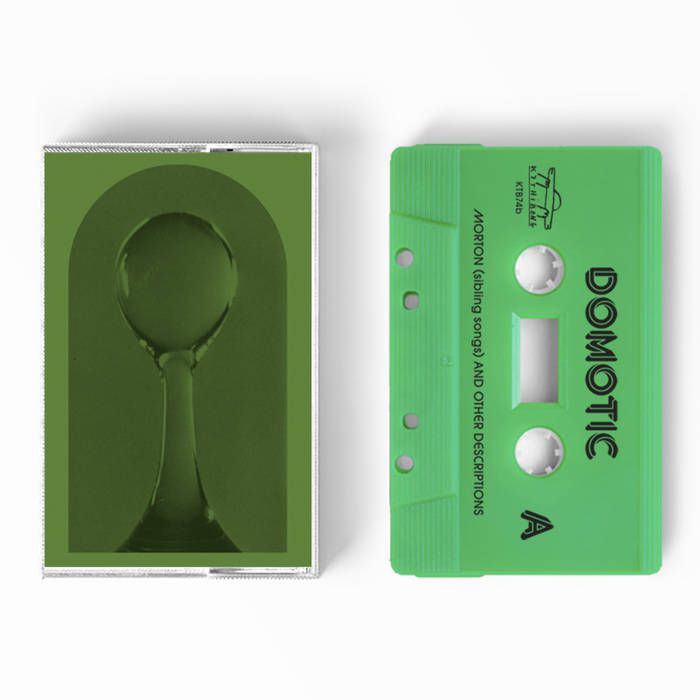 This cassette contains a lot of unreleased tracks written between 2017 and 2021 that were not selected to be part of the "Descriptions Of An Unfolding Event" album.

Stéphane Laporte's solo musical project, Domotic, is a fine example of longevity. Since Bye Bye, his first album released in 2002, the Parisian conscientiously digs a groove aligning on the same axis — which over time looks more like an orbit — the aesthetically perfect pop of the Beatles, psychedelic rock, Old School Ambient, the glorious electronica of the 90’s, the eccentricities of "library music" and the rigor of minimalism. However, it would be unwise to reduce the half-dozen albums and the handful of shorts signed by Domotic to these few influences, as the approach of each of his discs corresponds to an instrumentarium, a precise recording method and an associated concept. Moreover, it seems that for Domotic the construction process is just as important as the result obtained. It is perhaps this perpetual search for new technological and aesthetic experiences, governed by unusually high requirements, which leads him to produce pop as one would compose scholarly music.
In the early 2000s, Laporte began to produce music through Pro Tools software by training as a sound engineer. In the evening, he tries his hand at recording synth sounds that will compose Bye Bye, his first record for the Active Suspension label. Three years later, Ask for Tiger, his second album, transposes his fine melodic triturations into song format and vocals make an entrance.
There follows a period during which the Parisian will favor collaborations: Centenaire, post-folk rock project in the company of Aurélien Pottier and Damien Mingus, Karaocake, lo-fi pop duo with finely outdated keyboards, alongside Camille Chambon, and Egyptology, “synthetic-cosmic” pair with Olivier Lamm.
On the sidelines of these various projects, Laporte returned to solo production, in 2013, with Before and After Silence, a lo-fi and rugged psychedelic pop album, followed by a series of compositions for art films and short films and instrumental albums, including two for the Antinote label under his own name, and a minimalist krautrock record for Gonzaï.
His career and his various experiences have allowed the Parisian to refine the complex aesthetic identity of Domotic while multiplying the caps: multi-instrumentalist, composer, arranger but also sound engineer and producer as he admirably showed by passing behind the console for Orval Carlos Sibelius’ Super Forma in 2013 and Forever Pavot’s La Pantoufle in 2017.
Under a dark and deep blue cover with a design reminiscent of sound illustration records, Descriptions of an unfolding event immediately displays its content "Chords / Melodies / Textures / Rhythms / No words".
Combining his passion for soundtracks, his talent for writing songs without words and a composition process inspired by both musical and aesthetic minimalism, Domotic develops on this new album themes reminiscent of François de Roubaix or Ennio Morricone's soundtracks. The endlessly pared down writing and composition are based on the simple repetition and changes of chord of layered melodic forms played on piano and synth and supported by vocals; these finely orchestrated melodic patterns are then gently mangled, as if subjected to a drift which would gradually modify their shape and texture.
This second step consists in exploring the possibilities of disappearance of these precious variations into rich textural depths. A bit like the American visual artist Sol LeWitt whose work of wall drawings is based on the repetition of simple shapes constructing a true visual narrative. Laporte develops a musical development made up of thirteen pieces that function as so many perspectives, modulations and alterations of melodic patterns; this game of repetitions / variations / deteriorations accentuates the narrative dimension while creating a play-set of distorting sound mirrors, blurring the temporality and bringing out a certain nostalgia.
As an assertive purist, Laporte has favored analog devices (pedals, magnetic tapes and spring reverb) for filtering his sounds, giving them subaquatic metallic nuances and offering them an organic unraveling. Imagine Vladimir Cosma grinded by Christian Fennesz or Broadcast granularized by Jan Jelinek; you're almost there, with the difference that Domotic, even in its most advanced dissolutions, likes to preserve a certain physicality to the sound which conveys powerful images.
He thus poses side by side a piece with strong and clear instrumentation and its submerged false doppelganger, with degraded contours and resonance, and suggests to hear its melodic DNA through the hull of a submarine: the themes seem to liquefy, the rhythms are no more than a distant hydraulic punctuation and the blips evoke the sweeping of a sonar.
If the majority of the titles of the pieces (Very Deep, Deeper Again, Through Phases, Suspension 2) reinforces this feeling of diving into deep waters, Laporte nevertheless allows himself a wink tribute to the composer Morton Feldman in the shape of a melodic madeleine, with the hit-like Morton, available in 2 versions, Pop Drums and Gamelan, which sounds like the credits of a 70s American soap opera, and its Asian version.
Special mention to A willingness to fall asleep, a minimalist avatar in the form of an aquatic hypnosis session where a piano motif swims with timeless grace between an asthmatic oscillation and a spectral chorus drowned in reverb.
An ambitious project initiated by Stéphane Laporte in 2017, Descriptions of an unfolding event crystallizes the vast musical inspirations and aesthetic concerns that have animated Domotic for several years. Before and After Silence (2013) and Smallville Tapes (2017) were already exploring this logic of “pop decomposition”, each in their own register and time; this new disc sees Laporte at the top of his melodic art navigating between minimalism, psychedelia and liquid experiments.
And we envision Steve Reich and Ennio Morricone chatting with Jacques-Yves Cousteau on the Calypso deck...

Bandcamp Daily  your guide to the world of Bandcamp